Amazon has released its Fire TV Streaming Trends for 2021, which reveals that India consumers are spending more time on these devices and also using them for activities such as listening music, playing games or controlling smart home devices. The report shows that users in India are spending nearly four hours per day on Fire TV devices in 2021, compared to an average of three hours in 2020.

More importantly, ​​nearly one in three Fire TV customers have disconnected their cable or DTH connection, according to Amazon’s report. Clearly, the Fire TV Stick has replaced cable or DTH as the main device to access TV content in many homes. The Fire TV Stick lets users convert their regular TV into a Smart one, allowing users to access streaming websites and apps such as Amazon Prime Video, YouTube, Netflix, etc.

Amazon has sold 150 million Fire TV devices worldwide, and while it has not revealed the exact number for India, it starts that more consumers in the country are buying these devices. The company’s report says that customers purchased Fire TV devices in 80 per cent of pin codes across India. More importantly, smaller cities like Hisar, Tiruvallur, Chittoor, Alwar, Imphal, and South Andaman saw increased growth in sales for these. 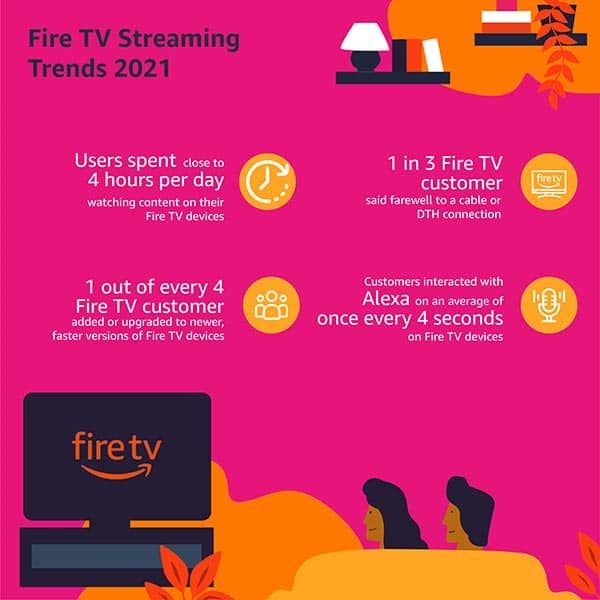 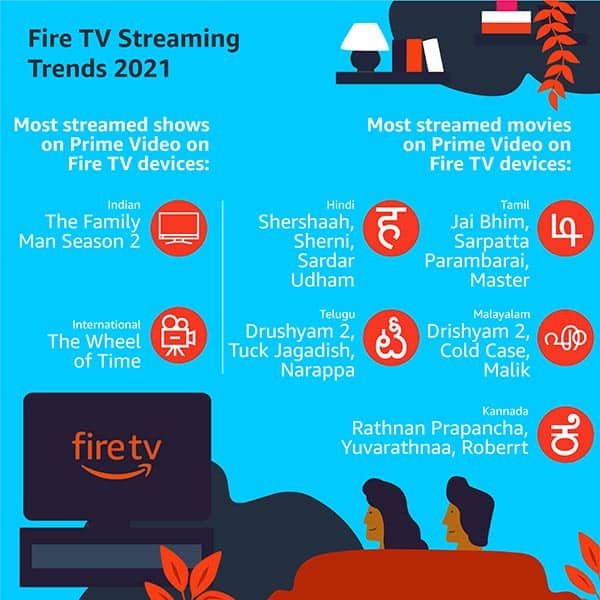 Further, one out of every four customers added or upgraded to a newer, faster version of Fire TV devices. The devices remain top 10 most popular products on the website during Prime Day and the Amazon Great Indian Festival sale.

In terms of content, comedy was the most preferred genre among customers. Customers asked Alexa to play ‘Tarak Mehta ka Ooltah Chashmah’ once every minute, making it the most searched TV show on Fire TV devices.

‘The Family Man Season 2’ was the most-streamed Indian show while ‘The Wheel of Time’ was the most streamed international show on Prime Video on Fire TV devices.For kids, the popular shows were: Peppa Pig, Doremon, and Cocomelon with at least one user asking Alexa for these shows every minute.

Amazon’s report also showed that users are also listening to music on Fire TV with one out of four customers doing this. Streaming of yoga and fitness apps on Fire TV devices saw an increase of 15 per cent as well.

Meanwhile, playing games on Fire TV devices emerged as another activity for Indian consumers. Games like Ludo King, World Cricket Championship, and Little Singham were the top online games played on these. Smart home control requests by customers using Alexa on their Fire TV devices also increased by over 150 per cent in 2021 versus last year.

The most streamed movies on Prime Video include:

Rashid, Joshi among golfers set to tee off at PGTI Players Championship

‘Dissapointed with tennis governing bodies’ – World No. 1 Iga Swiatek pulls out of BJK Cup finals due to scheduling

Rashid, Joshi among golfers set to tee off at PGTI Players Championship

‘Dissapointed with tennis governing bodies’ – World No. 1 Iga Swiatek pulls out of BJK Cup finals due to scheduling