Jose Mourinho, the once self-proclaimed “Special One,” might be better described as a “Man of the People” now.

The Portuguese coach extended his perfect record in European finals to five titles by guiding Roma to the inaugural Europa Conference League trophy. After winning nearly everywhere he’s been, most recently with European powers Real Madrid, Chelsea and Manchester United, bringing Roma its first continental trophy in more than six decades has a different feeling.

“It’s one thing to win when everyone expects you to win, when the squad is made to win, when the investments have been made to win, but it’s entirely different to win things that remain immortal, that stay forever,” a teary-eyed Mourinho said following Roma’s 1-0 victory over Feyenoord in Tirana, Albania, on Wednesday. “That makes you feel truly special.”

Roma, a three-time Serie A champion that had lost its previous two European finals, hadn’t won anything at all since raising the often-neglected Italian Cup trophy 14 years earlier.

At the final whistle, Mourinho held up five fingers to signify his five European titles as he jumped up and down in celebration. 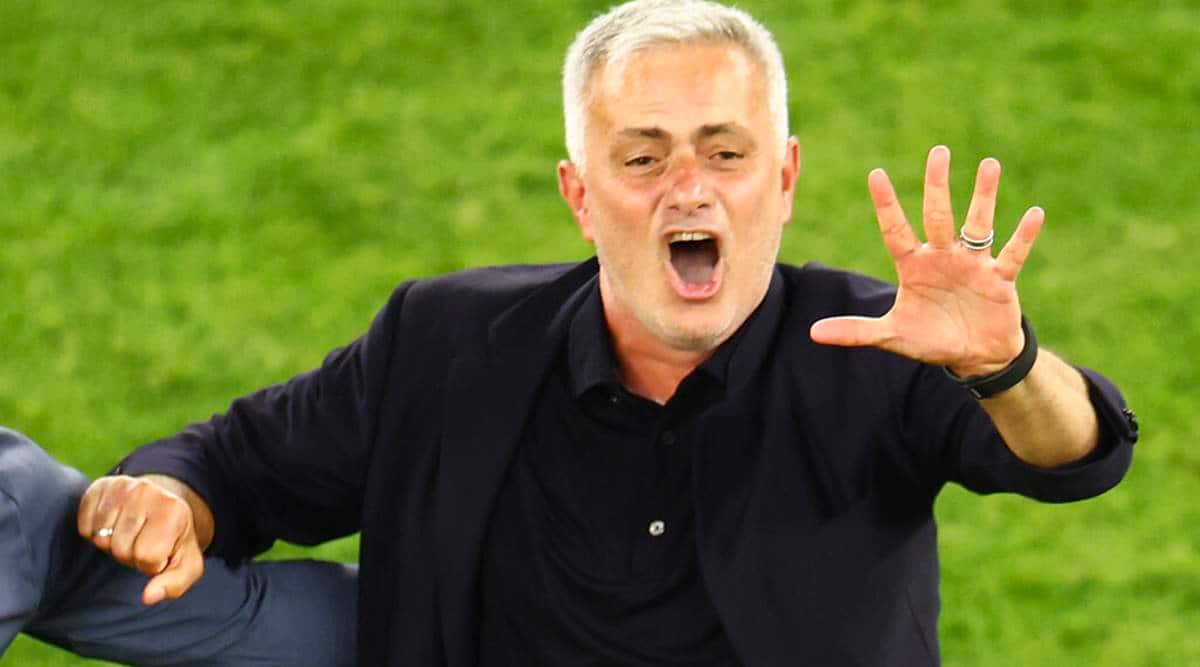 Jose Mourinho celebrates at the end of the Europa Conference League final soccer match between AS Roma and Feyenoord at the National Arena stadium in Tirana, Albania. (AP)

“Of course I think about myself but I’m thinking much more about the Romanista fans who can celebrate tonight,” he said. “I hope they can enjoy themselves. This will live on forever.”

Besides the few thousand Roma spectators inside the small National Arena in Tirana, 50,000 Giallorossi supporters watched the game on giant screens at the Stadio Olimpico in Rome. At the final whistle, fans ran onto the empty field at the Olimpico, waving banners and singing the team’s songs.

The celebrations went on all night in Rome as fans lit flares in front of the colosseum and buzzed and honked their way through historic piazzas on their scooters. Then 3,000 of them welcomed the team back home at the city’s airport at 4 a.m.

Mourinho, who was a surprise hiring by Roma’s new American owners 11 months ago after he fell out of favor at Tottenham, tapped into Roma’s passionate fan base from the moment he arrived in the Italian capital.

“I feel like a Romanista but that’s how I operate,” he said. “I’m a Portista, an Interista, I’m a Chelseasta. I’m crazy about Real Madrid. Now I’m Romanista. I belong to all these clubs because we achieved moments like this together.”

Moments like the first-half goal in the final from Nicolò Zaniolo, the talented 22-year-old midfielder who Mourinho clashed with at the start of the season as he returned from two serious knee injuries, one of which kept him out for all of last season and prevented him from taking part in Italy’s run to the European Championship title.

Or how about the 27 goals scored across all competitions this season by Tammy Abraham, the 24-year-old England striker who was cast aside by Chelsea last year before Mourinho convinced Roma to spend 40 million euros ($43 million) on him.

Or the physical defending from veteran English center back Chris Smalling, who kept Feyenoord’s Cyriel Dessers, the Conference League’s top scorer, in check.

Or Leonardo Spinazzola, the speedy fullback who ruptured his Achilles tendon during the quarterfinals of Italy’s Euro 2020 run, returning in time to finally play in — and win — a European final.

Or the composed play of 25-year-old Lorenzo Pellegrini, who has carried on the tradition of Roma captains being Roman-born and Romanista. He achieved something that former captains Francesco Totti and Daniele De Rossi never did at Roma — winning a European trophy.

“I would never have imagined accomplishing this at 25,” Pellegrini said, “with this armband on.”

Nothing Ear (Stick) launch date confirmed by the company: here’s when they’ll be official

Nothing Ear (Stick) launch date confirmed by the company: here’s when they’ll be official