I have been witness to the transformation of OnePlus from a startup to one of the biggest players in the premium smartphone segment across markets, especially India. Now, with the OnePlus 10 Pro, the company has a new flagship offering at the top of a product line that is much longer than it’s ever been. OnePlus has morphed from a one-phone-at-a-time player to a brand that has multiple devices across price points aimed at different users. But the OnePlus 10 Pro is clearly aimed at top of the line customers, those who expect nothing less than the best from OnePlus.

The OnePlus 10 Pro is clearly one of the most stylish Android phones out there. The Volcanic Black has a metallic matte finish with the camera module standing out at the left edge because of its contrasting smooth metal finish and the hard to miss Hasselblad branding on the side of the four-ring design. It will take a second for people to recognise this phone a few weeks after it’s been launched. OnePlus knows this and is pushing a lot of marketing focused on the camera module. The OnePlus 10 Pro in the Volcanic Black colour option, which has a matte finish. (Image credit: Nandagopal Rajan/Indian Express)

While the rest of the design has not been tweaked, I could not help but notice that the alert slider is much more compact than before and blends into the edge of the camera module. The display has been one of the highlights of OnePlus flagships over the years. The OnePlus 10 Pro sports a 6.7-inch display with a top of the line resolution of 3216×1440 at 525 pixels per inch. When this is also offered at a refresh rate of 120Hz, the display just stuns you whether you are just unlocking the phone or playing a round of Traffic Rider or binging on Vikings during a flight. The audio quality also backs up this wonderful display and is loud enough for you not to push the volume to full wherever you are.

The phone also packs a host of features that push this as a good choice for gamers. I’m not so much a gamer, so I can’t really tell you how good they are. The OnePlus 10 Pro continues with the Hasselblad branding at the back. (Image credit: Nandagopal Rajan/Indian Express)

This is the second phone from OnePlus to sport the Hasselblad branding on the camera and that means this device is carrying on its head a lot of expectations on what the camera should do. The three-camera combo on the OnePlus 10 Pro is different in a way given that the main camera is 48MP while the ultra-wide has 50MP. In fact, the latter also has a larger sensor, and this points to where OnePlus has added its muscle this time. 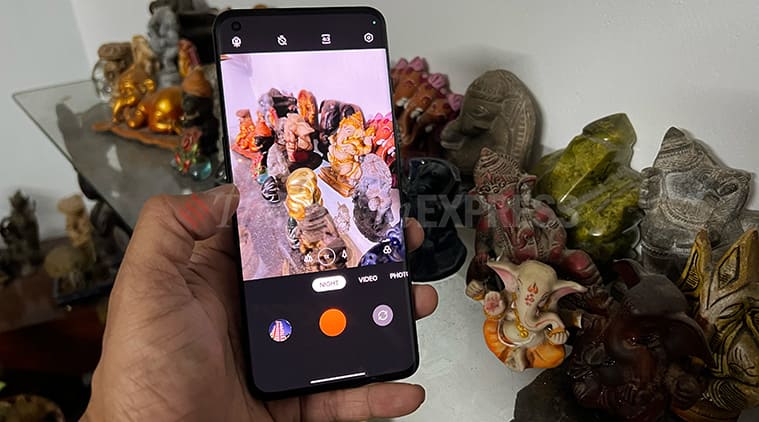 The ultra-wide camera on the OnePlus 10 Pro now comes with a 150-degree mode which is akin to a fish-eye lens. I loved using this camera especially since the fish eye was the one lens I could never own when I used to be a DSLR person. The old Calicut light house can be easily squeezed into a frame with this mode, and that too without losing any detail.

Even my three-storey house, which usually is hard to click given that there is not much space in front of it, came within frame from a certain angle. 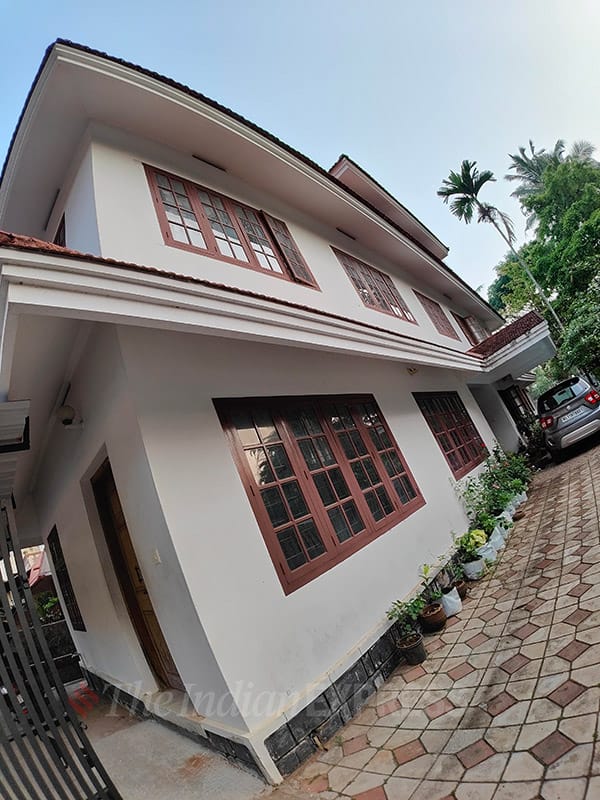 There is also the option to shoot with this mode in a circular format which is a fun feature at best. At the Freedom Square on Calicut Beach, I used this mode to get a shot of a stray dog lazing in the morning between the imposing columns that highlight the long history of this port city. 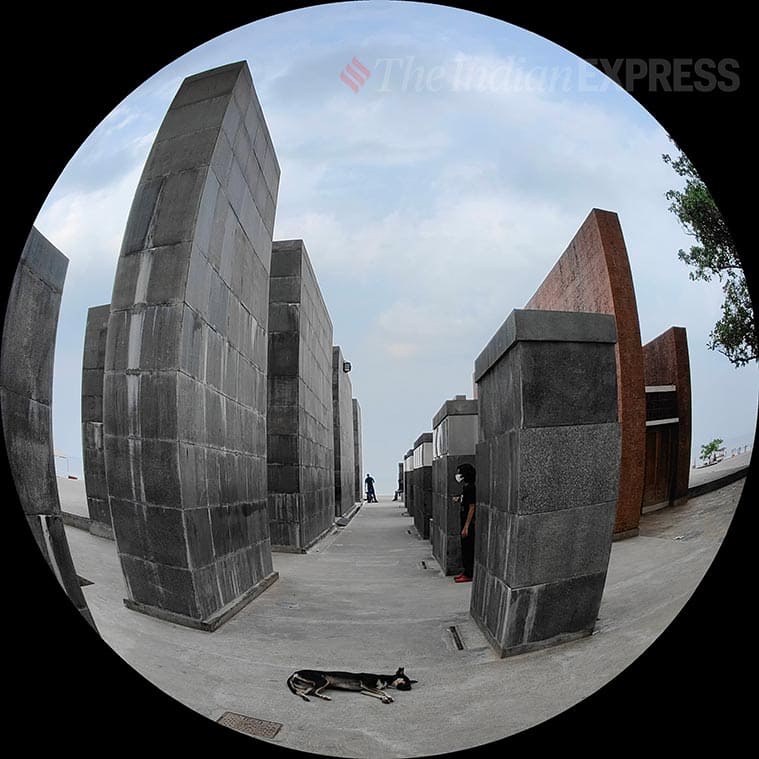 With the main camera the emphasis is clearly on doing what is expected better. The sensor here uses larger 1.12μm pixels with a 7P lens to enable some pretty good low-light images for instance. I was particularly impressed by how it could shoot the photo of an apartment block in front of the house even as it captured the details on a plant in the foreground.

A no-light pic of my mother’s Ganesha collection came out bright and with good detail, but maybe a bit too bright for my liking. 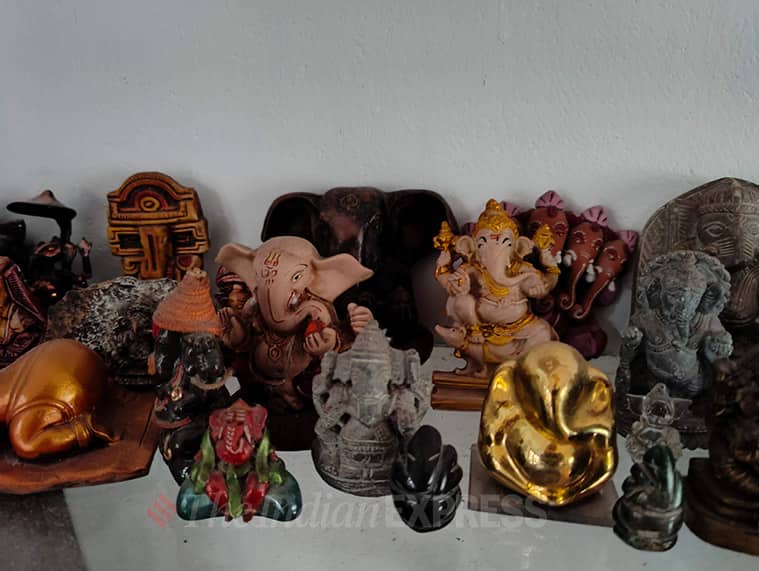 The XPan mode, which is unique to OnePlus flagships, resulted in some very poignant shots of the old sea bridge along the beach, though in hindsight the shot would have looked better had I managed to frame it with some people.

Another picture taken of the old sea bridge at the beach taken from the OnePlus 10 Pro. (Image credit: Nandagopal Rajan/Indian Express)

The telephoto lens is good for when you have to use it with a 3x optical zoom. When it goes to the 30x digital zoom a lot of noise does creep in. I also loved the Pro mode which gives precise control that is not a gimmick and actually reflects in the changes when you see the final results, like the photo of an ant on Penta flowers I shot with low exposure under the bright sun.

The Hasselblad collaboration brings three master preset styles into the filters that offer different moods for your photos. There is also a long exposure mode which I have not been able to test well. Frankly, this is the kind of camera that needs a review of its own.

The 5000 mAh battery on the OnePlus 10 Pro lasts well over a day. It can be charged to about 70 per cent in under 15 minutes using the 80W Supervooc charger that comes in the box.

The Oxygen OS 12 differentiates the OnePlus flagships from the spate of Android flagships with similar features. This time there are some interesting features which I loved, like the OnePlus Shelf which can be pulled in from any screen to give you quick access to the widgets that matter most. There is also OnePlus Scout, which is like a universal search for anything on the phone. The work life balance mode lets you preset how many notifications and from which apps can pop up while you are in the different modes. This is also a tweak users could actually end up using. One little thing that kept irritating me was that swipes at the right side of the screen kept taking me back to whatever was on the screen before. This was a problem while trying to browse some sites where you have horizontal navigation.

The other issue I noticed was that the battery seems to discharge at times when the phone does not seem to be doing much. I could not figure out exactly what was triggering this.

Yes, if you are a OnePlus fan with an older version of the phone like a OnePlus 6 with you. Also, if you love your photography this is one of the best phones you can own now. Once again OnePlus is clearly focusing on improving features across the board instead of adding gimmicky features that don’t translate to usage on a daily basis. This is a phone that ticks all the boxes and can tick off the competition on the camera front.