Panasonic has a new laptop to offer, but it’s a little different from the notebooks that are on the market. And you might not want it unless you are from the military, police, or working in a warehouse.

Its new Toughbook 40 – also known as the “ultimate Toughbook” brings modularity functionality to the fully rugged laptop segment. With a starting price of Rs 3.75 lakh, Panasonic’s Toughbook 40 costs a lot more than many pro-laptops on the market. The company, however, says the price is justified for a notebook that caters to specific niche requirements and is a fully rugged, modern Windows 11 PC.

Made using a magnesium alloy chassis and carrying a massive 3.37 kg weight, the new Toughbook 40 boasts of IP66 rating for dust/water resistance, MIL-STD-810H temperature, humidity and vibration testing, and 1.8m drop tests. “It may look heavy to some, but the functional requirements supersede the inconvenience that it brings,” Wadhawan tells indianexpress.com.

View All
UPSC Essentials: Key terms of the past week with MCQs
ExplainSpeaking | Forex reserves & rupee’s exchange rate: What are th…
Kevin Rudd at Idea Exchange: I can never rule out Xi Jinping making a si…
Content blocking orders by govt and courts to Twitter soar 48,000%
Subscribe Now to get 66% OFF

From the outside, the Toughbook 40 looks like any other Toughbook Panasonic has launched over the years. It has a familiar design, a briefcase-like carrying handle, and lots of ports. Its thickness and size come in at 2.1-inches (53.3mm). That’s almost five MacBook Air stacked on top of each other. 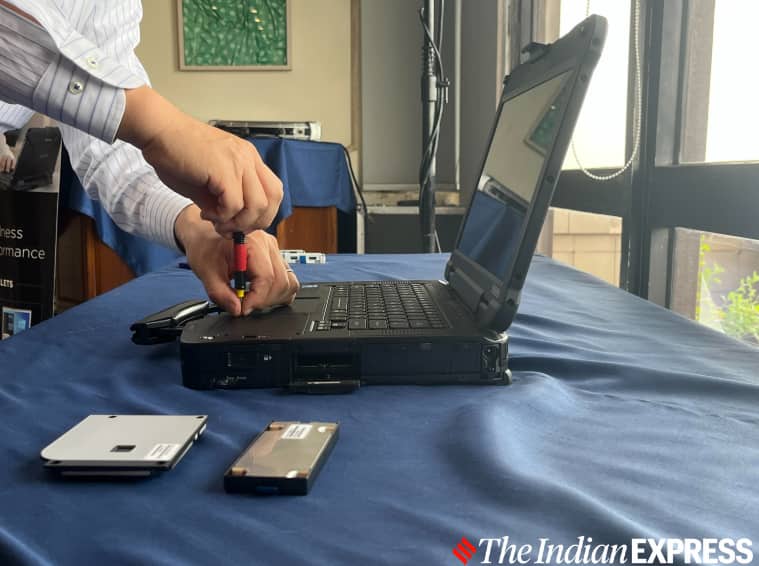 That size, however, works in favour of the Toughbook 40 if you include the modularity part. Panasonic says the notebook takes advantage of something called xPAK modular technology, giving consumers the ability to swap out the main battery, RAM and SSD drives. There are four areas- left and right sides, rear and palm-rest – that house swappable expansion abilities like adding a Smart Card Reader, DVD drive, or barcode reader. Customers can also repair or replace the battery, memory, storage, and keyboard with a simple screwdriver. The company claims the Toughbook 40 can last 18 hours on one battery and double with two batteries.

The rugged notebook runs on 11th-generation Intel Core i5 or i7 vPro processors with 16GB of RAM (64GB max) and 512GB of quick-release SSD storage (2TB max). Graphics are integrated (Intel UHD or Iris Xe Graphics) and the display is an FHD touch screen with glove mode and up to 1200 nits brightness. You will also find a 5MP Full HD webcam with Windows Hello IR and a privacy shutter. Built for the extreme conditions, the Toughbook 40 is the most toughest PC on the market. (Image credit: Anuj Bhatia/Indian Express)

Wadhawan says after New York Police Department (NYPD), the Maharashtra police uses 3800 Panasonic rugged devices, making it the second-largest emergency services customer for the Japanese company. Panasonic has a customer base across the pharmaceuticals, manufacturing, and automotive utility space in India. The rugged devices market is estimated to be between 220 to 250 crores, with Panasonic commanding over 60 per cent of the market share. Panasonic offers a range of rugged and semi-rugged devices, including tablets.