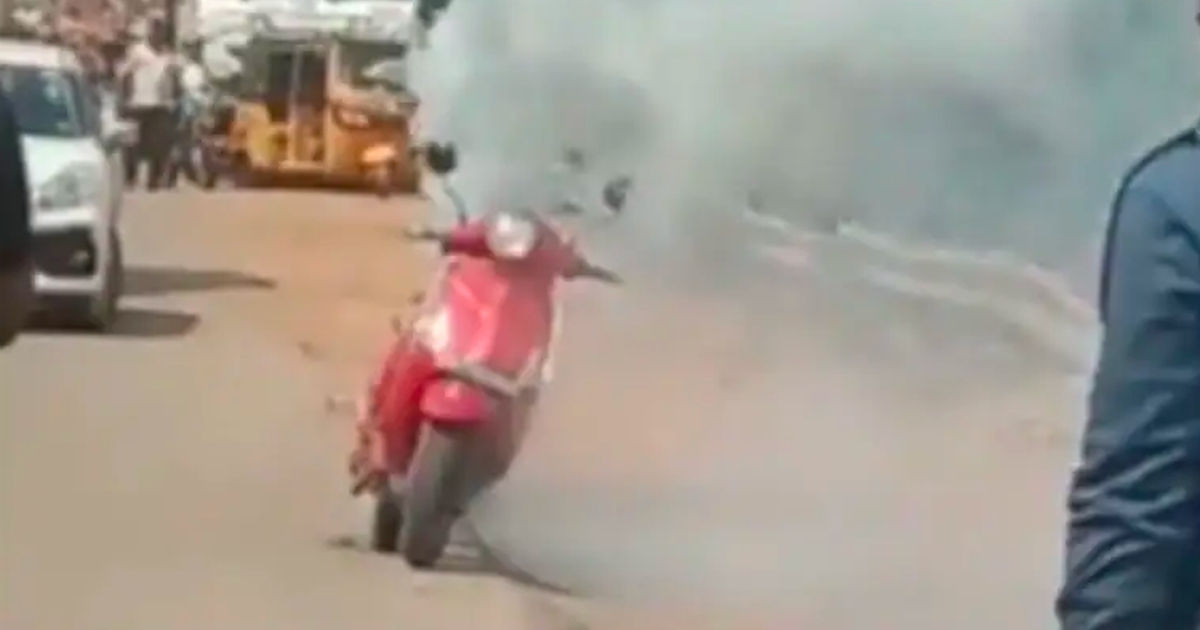 In a tragic incident in Chennai, an electric scooter caught fire in the scorching summer heat of the South Indian state. The incident took place in the Manjampakkam area on the outskirts of North Chennai and engulfed a Pure EV electric scooter in fumes just near Mathur Toll plaza. A 26-second video clip taken by a passerby that documented the incident shows a horrific fire mishap stemming from the electric two-wheeler and goes on to become the fourth such incident since Saturday. Multiple e-scooters have succumbed to fire-related mishaps with one big probable root cause coming up – thermal mismanagement.

As the summer season begins across the Indian subcontinent, temperatures are boiling high and are likely to increase further in the coming weeks as the season hits its peak temperature. However, some e-scooters seem to be running hot in issues already with four incidents being reported since Saturday. In all four incidents, e-scooters have been found bursting into flames even in an idle state under the sun. One such case reported recently shows a Pure EV electric scooter that was engulfed in fumes in Chennai.

“We are investigating the incident and will do a thorough assessment. We adhere to the highest safety standards through rigorous internal testing as well as special phase change materials being implemented in our battery packs to avoid rapid-fire/blast kind of scenarios” said Pure EV in its official statement on the matter.

The tropical city of Chennai is one of the hottest Indian cities with high humidity as well. The 26-second clip that was released showed the Pure EV e-scooter burning black and grey fumes near Mathur Toll plaza in the Manjampakkam area on the outskirts of North Chennai. The company released an official statement stating its forthcoming investigative measures to identify the root problem. The official statement also reassured customers of the safety measures that Pure EV enforces in terms of thermal management technology as well as production.

Complaints regarding the safety of e-scooters sold across India, especially as the mercury soars higher in the summer heat, can be expected to rise as multiple companies are under the investigative lights to tighten their development and production facilities for better safety for customers. The Road Transport Ministry on Tuesday asked the Centre for Fire Explosive and Environment Safety (CFEES) to investigate the two cases, which happens to be the defence laboratory of the Defence Research and Development Organisation (DRDO).

2022 Tata Nexon EV tipped to launch in India on this date: check expected price and specifications

Probable reasons for battery fires and their implications

Battery fires are rare and sparse but when multiple incidents start occurring across various locations and brands, it soon becomes a thing of concern. Multiple incidents including the recent Ola S1 Pro fire incident have grabbed the eyeballs of many. One of the biggest causes can be improper thermal management which leads to a phenomenon called thermal runaway in batteries. It occurs when the temperature inside a battery reaches the point that causes a chemical reaction to occur inside the battery. It is a chain reaction within a battery cell that can be very difficult to stop once it has started. Problems such as these are aggravated in the scorching heat of India. Implications of such an event are many folds. Immediate threats include fire hazards that can end up being life-threatening. Only time can tell how the large number of e-scooters currently plying on Indian roads will be able to handle the rising heat. In the larger picture, one can easily identify these fears of safety negatively affecting EV adoption in the country.

The post Pure EV e-scooter catches fire in Chennai: Should we concerned about thermal safety of e-scooters? first appeared on 91mobiles.com.