Realme is no stranger to launching special edition devices targeted at anime fans out there. The brand’s GT Neo 2 smartphone came out with a limited Dragon Ball edition complete with the titular character Goku’s colours and more. Now, the company has revealed yet another anime-edition phone.

The Realme GT Neo Naruto Edition phone is based on the Naruto-series. Taking elements from both Naruto and the sequel series Naruto: Shippuden, the phone’s design takes cues from the signature black and orange jacket worn by the show’s lead character Naruto Uzumaki, as well as the silver headband most ninja in the show wear, complete with the Konoha seal.

Also Read |Realme GT Neo 3 review: Speeds through, but does it jump the hurdles?

However, that’s just the device. Realme has also thrown in other themed goodies into the package, including a neat-looking Naruto-themed case, a black and orange charging adapter and a black USB type-C to type-C cable to go with it. Additionally, there is also a Naruto-themed SIM-ejector pin and a 10,000mAh power bank. 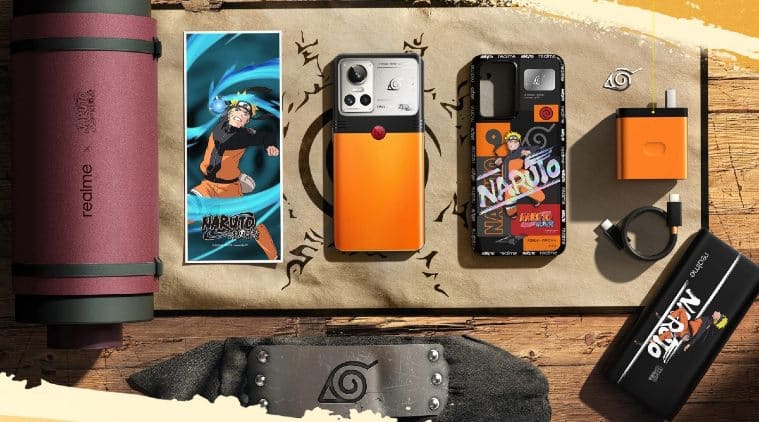 here’s everything you get inside the limited edition package. (Image Source: Realme)

The package also appears to include some Naruto posters as well as a rollable ‘ninja scroll’ from the show, that completes the experience.

Asides from the aesthetics, the phone itself is a regular Realme GT Neo 3 (the 150W fast charging variant) and includes the same hardware as its standard counterpart. This includes a MediaTek Dimensity 8100 chip. A 6.7-inch AMOLED display with 120Hz HDR10+ and an under-display fingerprint scanner. The single storage variant will also feature 12GB RAM and 256GB UFS 3.1 storage.

For the cameras, we have a 50MP main, 8MP ultrawide and 2MP macro camera, along with a 16MP front camera sensor. Other features include stereo speakers, NFC, a 4,500mAh battery and a type-C USB 2.0 port. However, Realme has thrown in Naruto-themed wallpapers, icons, sounds and even a custom charging animation.

The Realme GT Neo 3 Naruto Edition comes with a CNY 2,799 (about Rs 32,274) price tag for the single 12GB RAM/256GB storage variant. Open sales in China begin on May 31, but Realme is yet to announce any details on availability in India or other regions.